Manchester United and Paris Saint-Germain were two of the biggest winners on search engines during the 2021/22 soccer season, according to insight provided by DataPOWA.

Analysing global internet searches for clubs in Europe’s five biggest leagues (the Premier League, La Liga, Serie A, Ligue 1 and the Bundesliga) between August 2021 and May 2022, DataPOWA found that United drew 709.2m in total, with PSG in fourth on 638m.

The clubs’ success was powered by the arrivals of Cristiano Ronaldo and Lionel Messi last summer as both saw significant peaks in August, the month of their arrivals. Ronaldo drove 101.6m searches for United and Messi 173.4m for PSG.

Liverpool were the second most-searched-for club, attracting 689.2m searches thanks to their bid for the Quadruple at the end of the season. Barcelona finished in third (671.8m) and Real Madrid in fifth (540.5m).

English football again comes out on top when considering the leagues themselves. There were 1099.4m searches for the Premier League during 2021/22, more than double the number clocked up by nearest rival La Liga, which drew 480.5m searches.

Ligue 1 attracted the fourth highest number of searches for a league with 209.9m, but it grew the most on the previous season, adding 57.4m searches on its tally in 2020/21.
The full report can be downloaded from the DataPOWA website. 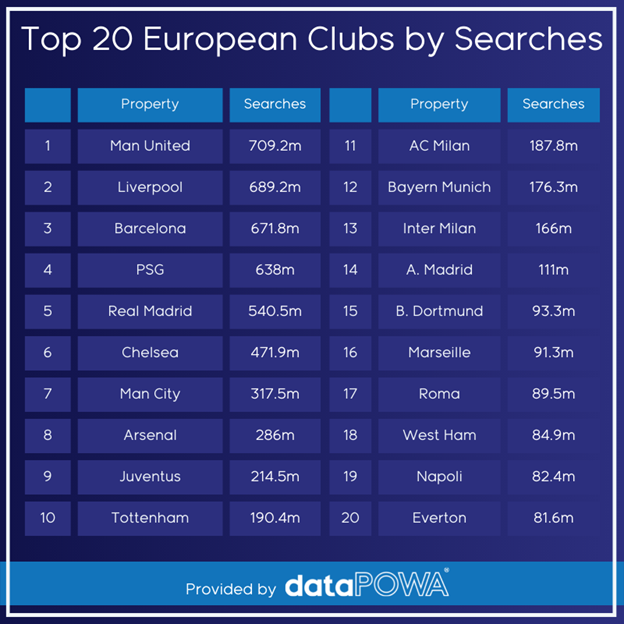 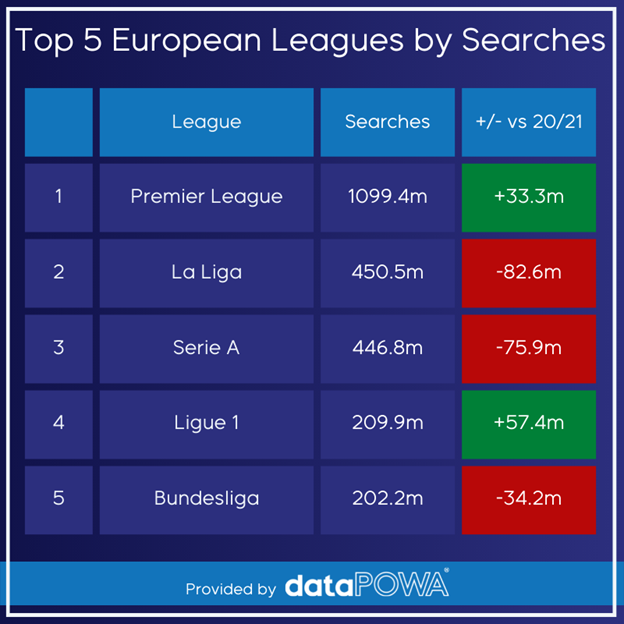 DataPOWA is a UK-headquartered, wholly-owned business within the IXUP Group, a publicly listed company on the Australian Securities Exchange (ASX). DataPOWA offers specialist data and analytics services to the sports market, including: