Week one of the NFL is finally upon us, the culmination of an exciting offseason featuring a number of high profile trades (Julio Jones to Tennessee) and free agent/waiver wire signings (JJ Watt to Arizona). Throw in a QB-heavy draft class and you have a recipe guaranteed to generate intrigue around the league – and, for the teams they went to, optimism looking forward. The first round of the 2021 NFL draft saw 5 quarterbacks (QBs) taken in the first round – only the 2nd time that’s happened since 2000.

The POWA Index tracks internet buzz around teams, leagues and events by monitoring social media, websites/blogs and search, while our algorithms behind the scenes boil the numbers down to one standardised index that allows us to compare how one entity compares to another when it comes to the world of online presence.

At the end of preseason, here are the top 10 NFL teams by POWA Index score, ranked by their average score over the last 30 days. 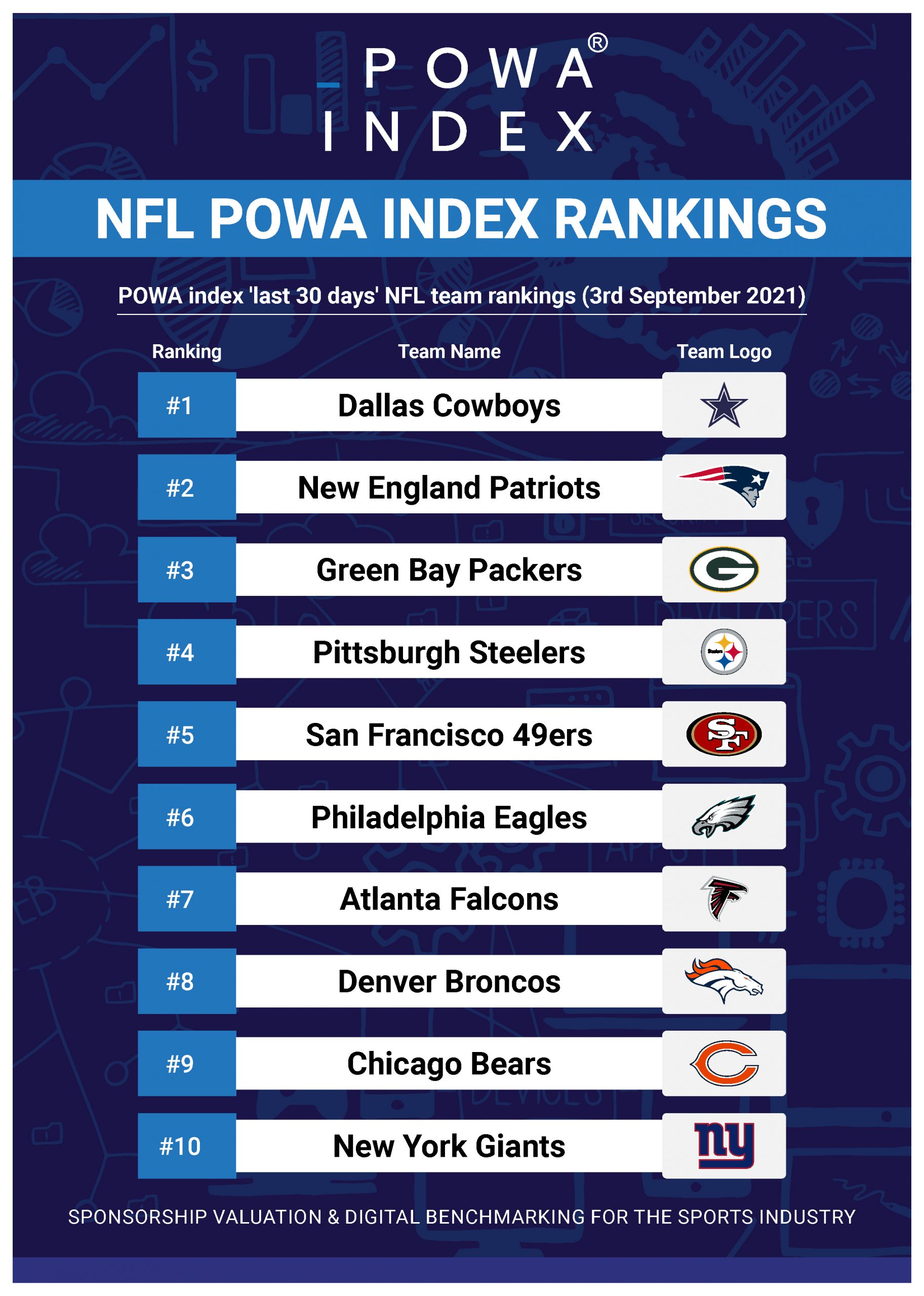 In what will probably come as a surprise to very few, “America’s team”, the Dallas Cowboys, rank a convincing #1 in the POWA Index. After a season-ending injury in Week 5 last year, QB Dak Prescott looks on track to play in Week 1, with Offensive Coordinator Kellen Moore quoted as saying “we’re not looking at anything from a limitation standpoint”. This generated plenty of excitement within the fanbase for the return of their 2x Pro Bowler.

In terms of their 21/22 season, the Dallas roster figures to pan out as a fringe contender for a deep playoff run, after going 6-10 last year while missing their star QB for the majority of the year. Talented 1st round draft pick LB Micah Parsons will contribute from day one, but it might be a little too soon for one of the NFL’s younger rosters to compete for it all.

Tied for the most Super Bowl rings in NFL history, the Patriots dynasty came at the perfect time to see an extremely passionate fanbase translate across to social media, helping them build up one of the largest online followerships in the league. Winning their first franchise championship in 2002, they’d follow that up with an incredible run that saw them compete in the season finale another 8 times from 2003-2019, winning another 5 in the process.

With Cam Newton no longer on the roster after being cut late into the preseason, rookie Mac Jones will take the keys to the franchise. Jones draws comparisons to franchise legend Tom Brady – both are tall, accurate passers from within the pocket, and share excellent vision downfield and a ‘mind’ for the game – but only time will tell if Jones can run coach Bill Belichik’s offense at the standard required to draw serious comparisons to one of the all-time greats.

Outside of Jones, the Patriots also added quality NFL-level talent through free agency in TE’s Hunter Henry and Jonnu Smith, OLB Matthew Judon, WR Kendrick Bourne and OL Trent Brown (via trade) to go alongside a roster that already featured quality on both sides of the ball, such as CB Stephon Gilmore, S Devin McCourty and OL Shaq Mason. And most fans of other teams will tell you – never count out New England, especially after an excellent 3-0 preseason.

Ranking 4th in the NFL for total followers across Facebook, Twitter and Instagram, Packers offseason discussion was as much about what didn’t happen as what did. After drafting QB Jordan Love in the 1st round of the 2020 NFL Draft, the writing seemed to be on the wall for the beginning of the end for legendary QB Aaron Rodgers.

The fallout of that decision to draft Love, instead of providing Rodgers with the additional talent to help the Packers improve in the short term, led to a standoff between Rodgers and Packers ownership, culminating in Rodgers refusing to report to the team ahead of the preseason. As a result of the distractions, Green Bay disappointed during the preseason, finishing with an 0-3 record.

With the dispute resolved and Rodgers back with the Packers, Rodgers and his teammates certainly have something to prove this year. They brought back former Packers WR Randall Cobb and added talented CB Eric Stokes in the draft, so look for them to continue to be in Super Bowl contention, as they have been for the majority of Rodgers tenure with the team.

Tied with the Patriots for the most Super Bowl’s in NFL history, Pittsburgh had a great run at the beginning of the social media era that saw them take home 2 rings in the 4 year period between 2006-2009 and create one of the largest followings across all platforms.

The Steelers lost key pieces during free agency due to cap constraints, and 39-year old QB Ben Roethlisberger is coming towards the twilight of his career. However, they drafted well in 2021, adding top RB prospect Najee Harris and TE Pat Freiermuth (amongst others), so we can expect to see them continue to add young pieces with an eye to the future in the coming seasons.

The 49ers have been to 2 Super Bowl’s and 2 Conference Championships since 2011 and were able to convert that success into a strong following online. They had one of the stronger offseasons in the entire NFL, and are primed to compete for a Super Bowl after 2020 was ravaged by injury.

Their first-round pick of QB Trey Lance generated a lot of buzz, both within the fanbase and across the NFL, with speculation that he may usurp incumbent QB Jimmy Garoppolo well before season end. Lance, a 21-year old out of North Dakota State, electrified during his single-season starting at college, throwing for 28 touchdowns and no interceptions – an NCAA record.

Irrespective of which direction coach Kyle Shanahan ends up going at QB, the roster is still one of the strongest in the NFL, featuring all-pro level talent in TE George Kittle, MLB Fred Warner, LT Trent Williams and RE Nick Bosa. If they can stay healthy, expect them to be in contention at the end of the season.

The Eagles haven’t yet recaptured the magic that saw them crowned Super Bowl champions in 2018. During this offseason, they made the decision to hit refresh, trading away QB Carson Wentz to the Colts and handing the keys to the franchise to promising 2020 draft pick QB Jalen Hurts.

They’re unlikely to compete this year but did receive draft capital in return for sending Wentz to Indianapolis, so seem to be preparing for upcoming seasons. Social media noise around the team was also helped by a thrilling preseason finale against the New York Jets that saw the game tied on the final possession by a 50-yard hail mary.

The Julio Jones-era is over in Atlanta. After a run from 2013-2019 that never saw him average less than 1,300 yards for a season, the Falcons sent the 32-year old to the Titans in return for draft capital. The Falcons hope the gap in the receiving core will be filled by TE Kyle Pitts, one of the most versatile offensive weapons in the draft, and a player who looks ready to contribute from day one.

The Falcons went 0-3 for the preseason, including a game against Jones’ Titans, but look well-positioned to move in a positive direction under new head coach Arthur Smith.

Another team that timed its success well during the beginnings of the social media era, Denver featured in 2 of the 3 Super Bowl’s between 2013 and 2015, winning one, and creating a social media following that ranks in the top 10 for both Facebook and Twitter.

Coming off of a 5-11 record, Denver impressed in the preseason, going 3-0. Time will tell what ends up coming out of the battle to start at QB between Drew Lock and Teddy Bridgewater, but top 10 2021 draft pick Patrick Surtain adds to an already strong defense featuring OLB’s Von Miller and Bradley Chubb, FS Justin Simmons and free agency addition CB Kyle Fuller.

The Justin Fields era is upon us in Chicago. While Andy Dalton will start to begin the 2021 season, Fields figures to play a long-term part in Chicago’s long-term future, although it’s unclear exactly what role he’ll play this year (although Chicago fans hope he gets as much playing time as possible).

The excitement in Chicago is tangible – as of publication, Fields jersey is the #1 top-selling jersey on nflshop.com, and while he might not start from the offset there can be no doubt that Chicago is ready to welcome Fields to the ‘Windy City’ with open arms.

The 2012 Super Bowl-winning Giants have one of the largest and most passionate fan bases in the entire NFL. For the 2018 season, they ranked 10th in jersey sales as a team, despite missing the playoffs with a 5-11 record.

They made a draft-day trade with the Bears (allowing them to move up and select Justin Fields) but grabbed themselves two 1st round picks (along with a 4th and 5th rounder) – an excellent return to move down from pick 11 to pick 20.

They used the 20th pick to select WR Kadarius Toney, who adds to an already strong receiving core alongside WR’s Kenny Golladay and Sterling Shepherd (as well as TE Evan Engram). The return of all-pro HB Saquon Barkley gives QB Daniel Jones a dangerous variety of offensive weapons that should make the Giants an exciting team to watch.