Ahead of the British Grand Prix this weekend, DataPOWA takes a deep dive into the rankings of the most powerful team and driver brands on the grid, as ranked by the POWA Index, the data-driven, real-time sports sponsorship valuation engine.

The POWA index is able to instantly analyse data from a wide range of data sources, from social media followers and interactions through to fan sentiment and game/event attendance. The combination of these inputs helps us arrive at a single ‘POWA’ score for each team or player, to help compare their commercial strength versus competitors. 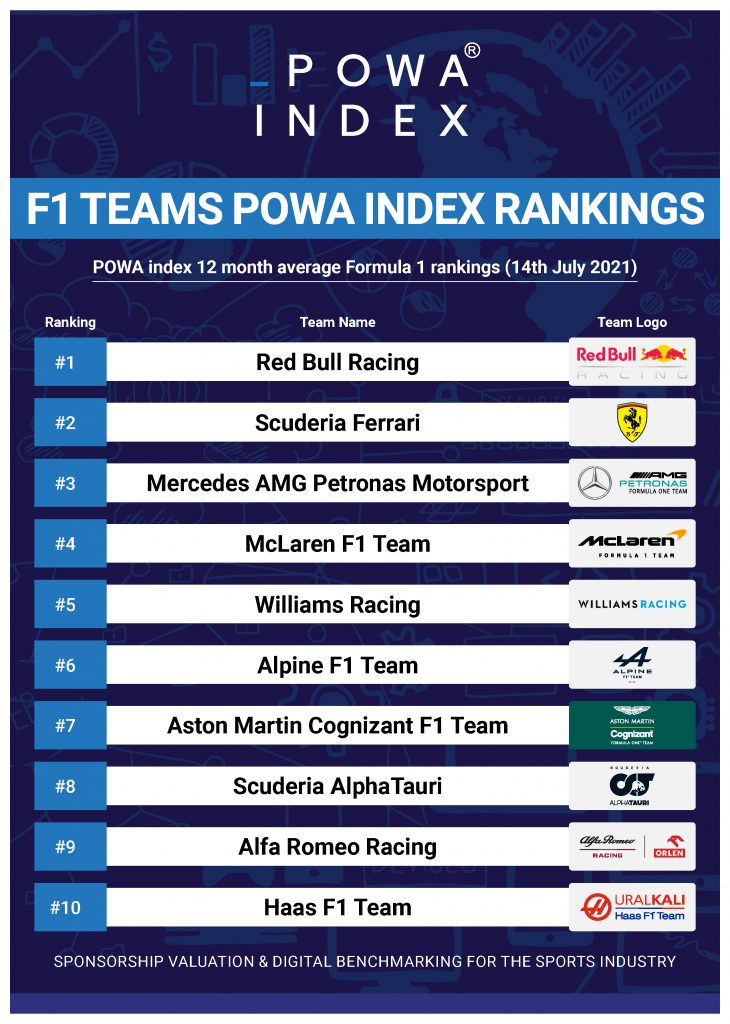 It’s interesting to see Haas propping up the rest of the table. Despite a poor last couple of years, the team has enjoyed some success since coming into the sport in 2015, and while F1 continues to compete with NASCAR for the US market, all signs point to US viewership trending in the right direction, suggesting there is a fanbase in the US that Haas could take better advantage of, especially as the only American manufacturer on the grid.

Perhaps unfortunately for Haas, searches for Nikita Mazepin pushed ahead of those for teammate (and son of former 7x world champion Michael) Mick Schumacher. Following controversy in late 2020, and a number of incidents on track, it’s not necessarily a surprise but something the team would rather have avoided.

A couple of former world champions (and once teammates at Ferrari) Sebastian Vettel and Kimi Räikkönen do not hold an official presence on certain platforms. Vettel currently doesn’t hold a personal profile on any social media platform, with Räikkönen only maintaining a modest Instagram profile (with an impressive 2.4M followers). Despite this, they continue to be mentioned regularly online, with Vettel the 4th most searched driver online since the new year.

Sport and team global rankings have remained generally stable throughout the last 12 months, however Ferrari have seen a noticeable global dip in recent months, possibly due to on-track performance. However, general sentiment towards the team has remained positive, and they’ve continued to show media power in the Italian market, ranking above the likes of the NBA and Real Madrid.

The power of the Tifosi has helped maintain the sport’s media strength within Italy as well, with F1 ranking impressively ahead of the UEFA Champions League, after a poor showing by Serie A teams saw no Italian presence into the Quarter Finals of the competition.